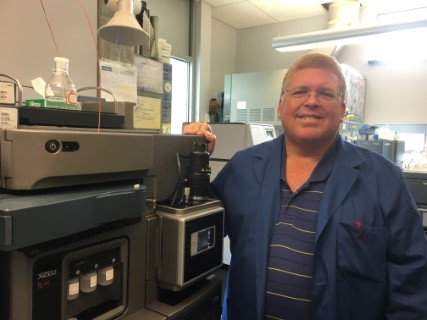 In this paper we investigate the use of smaller column packing (sub 2μm particles) to monitor for many cyanobacterial toxins using a generic gradient method and a targeted Liquid Chromatography/Tandem-Mass Spectrometry (LC/MS/MS). In this case we analyzed various freshwater lake samples from a region in Ecuador for a variety of toxins including microcystins, anatoxin-a, cylindrospermopsin as well as newer toxins, such as euglenophycin, anabaenopeptins and micropeptins. In addition, Metagenomic sequencing and analysis of the samples identified one genomic bin identified tentatively as Planktothrix agardhii, and several genomic fragments of other toxin producing cyanobacteria. Using the genome we examined which genes were present and what toxins were capable of being produced. In this case both the DNA analysis and LC/MS/MS analysis gave results that agreed. Data from both techniques will be presented including the novel detection of various forms of cylindrospermopsin in this sample. Additional work from Ohio River water samples will be discussed as well showing commonalities of toxic productions over several years.